Why Stress Makes It Harder to Kick the Common Cold 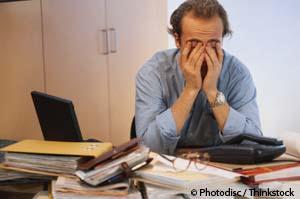 Stress has a major influence on the function of your immune system, which is why you've probably noticed you're more likely to catch a cold when you're under a lot of stress. This is true for both acutely stressful episodes, such as preparing a big project for work, and chronic stress, such as relationship troubles or grief.Both will deteriorate your immune system and leave it less able to fight off infection.
Now researchers have revealed that the stress hormone cortisol may play an intricate role in why high levels of stress have such a detrimental impact on your immune system.

Why Too Much Stress Makes You More Vulnerable to Illness

When researchers from Carnegie Mellon University infected study participants with a common cold virus, those who had reported being under stress were twice as likely to get sick.i When you're stressed, your body releases stress hormones like cortisol, which prepare your body to fight or flee the stressful event.
Your heart rate increases, your lungs take in more oxygen, your blood flow increases and parts of your immune system become temporarily suppressed, which reduces your inflammatory response to pathogens.When stress becomes chronic, however, your immune system becomes less sensitive to cortisol, which actually heightens the inflammatory response.
This is what actually leads to coughing, sneezing and other cold symptoms, as well as makes you more vulnerable to getting sick in the first place. And, in the event you do get sick, emotional stressors can actually make your cold and flu symptoms worse. As lead author Dr. Sheldon Cohen, a professor of psychology at Carnegie Mellon University, noted:ii

"Inflammation is partly regulated by the hormone cortisol and when cortisol is not allowed to serve this function, inflammation can get out of control. … The immune system's ability to regulate inflammation predicts who will develop a cold, but more importantly it provides an explanation of how stress can promote disease.
When under stress, cells of the immune system are unable to respond to hormonal control, and consequently, produce levels of inflammation that promote disease. Because inflammation plays a role in many diseases such as cardiovascular, asthma and autoimmune disorders, this model suggests why stress impacts them as well."

You are in fact an extension of your environment, which includes everything from your thoughts and belief systems, to toxic exposures and exposure to sunlight, exercise, and, of course, everything you choose to put onto and into your body.
Rather than being controlled by your inherited genetic makeup, which genes are turned "on" and which are turned "off" can be greatly influenced by your thoughts, attitudes, and perceptions! This is the rapidly emerging field known as epigenetics, and stress exerts a powerful negative influence on your epigenetic health.
Many, if not most people carry emotional scars -- traumas that can adversely affect their health. Chronic stress is akin to emotional scarring, and causes ongoing damage to your cells. According to cellular biologist Dr. Bruce Lipton, the true secret to life does not lie within your DNA, but rather within the mechanisms of your cell membrane.
Each cell membrane has receptors that pick up various environmental signals, and this mechanism controls the "reading" of the genes inside your cells. Your cells can choose to read or not read the genetic blueprint depending on the signals being received from the environment.
Using techniques like energy psychology, you can correct the emotional short circuiting that contributes to your chronic stress which helps to optimize your genetic expression. My favorite technique for this is the Emotional Freedom Technique (EFT), but there are many others, such as yoga, journaling and prayer. Choose whichever one (or a combination of them) that appeals to you, and if you don't sense any benefits, try another, until you find what works best for you.

Like stress, vitamin D also works on the epigenetic level to influence your susceptibility to illnesses like colds, as well as chronic disease. Vitamin D influences nearly 3,000 of your 25,000 genes, and plays a critical role in your immune response. Vitamin D could rightly be described as a "miracle nutrient" for your immune system, as it enables your body to produce well over 200 antimicrobial peptides, which are indispensable in fighting off a wide range of infections.
Research has confirmed that "catching" colds (and flu) may actually be a symptom of an underlying vitamin D deficiency. Less than optimal vitamin D levels will significantly impair your immune response and make you far more susceptible to contracting colds, influenza, and other respiratory infections.
In the largest and most nationally representative study of its kind to date, involving about 19,000 Americans, people with the lowest vitamin D levels reported having significantly more recent colds or cases of the flu -- and the risk was even greater for those with chronic respiratory disorders like asthma.iii
At least five additional studies also show an inverse association between lower respiratory tract infections and vitamin D levels, and you can read about them in detail here. But the research is very clear, the higher your vitamin D level, the lower your risk of contracting colds, flu, and other respiratory tract infections.
It's not surprising, then, that the average American gets so many colds each year, as current guidelines for optimal intake and normal vitamin D levels are far too low -- and since most people do not get adequate sun exposure on a daily basis (which is what produces vitamin D in your skin) many are deficient. I strongly believe you could avoid the vast majority of colds and influenza by maintaining your vitamin D level in the optimal range.

The Perfect "Recipe" for Avoiding Colds

Chronic stress and vitamin D deficiency could be described as the perfect "storm" for developing colds, as if you're facing these two scenarios and you're exposed to a cold virus, there's a good chance you're going to get sick.
Cold viruses can live on pens, computer keyboards, coffee mugs and other objects for hours, so it's easy to come into contact with such viruses during daily life. However, the key to remember is that just being exposed to a cold virus does not have to mean that you'll catch a cold. If your immune system is operating at its peak, it should actually be quite easy for you to fend off the virus without ever getting sick.
If you want to join the ranks of "those people" who rarely get sick, start with the strategies listed below. This is by no means an exhaustive list, but it does give you a general idea of how to live healthy and avoid getting frequent colds and other infections. Other factors, like getting high-quality sleep and avoiding exposure to environmental toxins, are important too, but if you're looking for a few simple "secrets" to get started on today... start with these...

Eating sugar, fructose and grains will increase your insulin level, which is one of the fastest ways to get sick and also experience premature aging. Leptin is another key hormone associated with disease and the aging process.
Like your insulin levels, if your leptin levels become consistently elevated, your body will develop resistance to this hormone, which may wreak havoc in your body. My nutrition plan, based on natural whole foods, is your first step toward optimizing your insulin and leptin levels and increasing your chances of living a longer, healthier life. The heart of my program is the elimination, or at the very least, drastic reduction of fructose, grains and sugar in your diet – a change that can dramatically improve your immune function.
If you are exercising regularly the likelihood of your acquiring a cold or other viral illness is significantly reduced, and studies have clearly shown this. In one such study, staying active cut the risk of contracting a cold by 50 percentiv , and cut the severity of symptoms by 31 percent among those who did catch a cold. The researchers noted that each round of exercise may lead to a boost in circulating immune system cells that could help ward off a virus.
It is actually a well-known fact that exercise improves the circulation of immune cells in your blood. The job of these cells is to neutralize pathogens throughout your body. The better these cells circulate, the more efficient your immune system is at locating and defending against viruses and other pathogens that may opportunistically overrun the body.
Due to the key role that exercise plays in supporting your immune system, it's crucial to treat exercise like a medicine that must be properly prescribed, monitored and maintained for you to enjoy the most benefits. Essentially, you need to have a varied, routine that includes high-intensity interval exercises like Peak Fitness.
One of the most important aspects of a healthy diet that is frequently overlooked is the issue of eating uncooked, natural raw food.
Unfortunately, as you may be aware, over 90 percent of the food purchased by Americans is processed. And when you're consuming these kinds of denatured and chemically altered foods, it's no surprise we have an epidemic of chronic and degenerative diseases, not to mention way too many cases of colds and flu. Ideally you'll want to eat as many foods as possible in their unprocessed state; typically organic, biodynamic foods that have been grown locally, and are therefore in season. But even when you choose the best foods available you can destroy much of the nutrition if you cook them.
I believe it's really wise to strive to get as much raw food in your diet as possible. I personally try to eat about the majority of my food raw, including raw eggs and organic, naturally raised meats.